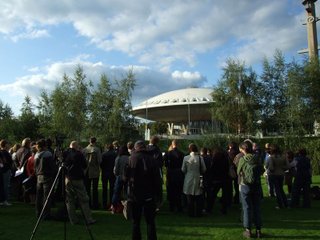 Sunday september 14th a small gathering was held at the Evoluon, which was the last event of the Be(com)ing Dutch art project of the Van Abbe Museum Eindhoven. Unfortunately we were denied access to the building, so the gathering had to take place on the grass outside the gates, with the building in the distance. By coincidence, this day also was Open Monument day. What a big difference with this same day in 2006, when we did get permission to open the building to visitors.

The artists Bik Van der Pol were planning to do a piece of performance art, announced as follows:

On the last day of the Be(com)ing Dutch exhibition, the public is called upon to generate enough compressed mental power in a moment of great concentration to launch the Evoluon into flight. (The fact that the dish is loose on its base will increase the chances of success.)

About a hundred people were there. Everybody got UFO-shaped candy and concentrated a lot. But try as one might, they were not able to get the Evoluon to take off. But that wasn't a problem. While concentrating, the artists read out a long letter. 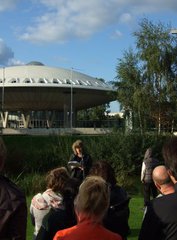 The main theme of Be(com)ing Dutch was cultural identity. A main theme of the artists Bik van der Pol is having people look at buildings or places, and think about their past and future. The Evoluon of course once was a great science museum, that was visited by many people, and has a special place in the heart of Eindhoven, it is part of Eindhovens culture. It has a place in the heart of many people, and they all want to be able to wander its halls again, and see and interact with the marvels of technology, which is what it was built for.

The artists wanted to remind us what a great place in society the Evoluon once had, and should have again. The letter told us about the history of the Evoluon, how it came to be and what its importance was for our society. The reminding sure worked, because there was a long article in the ED newspaper the next day.