When the Evoluon was closed, exhibits were given to other museums in The Netherlands. Here a list of museums where parts of the Evoluon exhibit recently have been seen.

In Eindhoven is a museum in one of the Philips buildings. We went to see if they were able to preserve some displays from the Evoluon. You can find pictures here 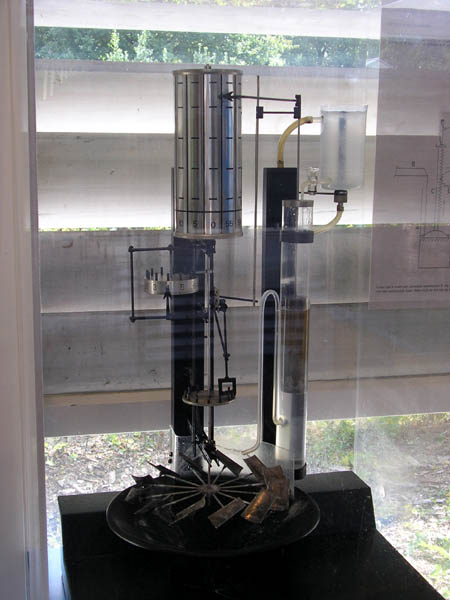 A few exhibits from the Evoluon that have to do with measuring time were given to the Beiaardmuseum Asten (Ostaderstraat 23, http://www.carillon-museum.nl/, tel 0493-691865). Most are in the depot, only this water clock from the Evoluon is part of the permanent exhibition. (Thanks to Wylliam Robinson)

The big glass box that had the intricate wire system that had many steel balls rolling in it, each taking a different course because of the many jumps and switches in the parcours, has been seen in the Techniek Museum Delft. http://www.museum.tudelft.nl/

Jac Goudsmit has visited this museum too and filmed the machine for us! Click here for his film (13 MB mpg)

Some steam engines that were in the Evoluon can now be seen at the Stoommachinemuseum at the Oosterdijk te Medemblik. They still work.

The black sphere showing the composition of atoms can now be seen at the Planetron near Dwingeloo in Drente, and it still works.

The Meccano machines that could draw pictures that were in the cellar of the Evoluon have been preserved in the Techniek Museum HEIM in Hengelo. See some pictures of them here.

Wilbert Bouts writes: The models of the mechanical gear boxes that were in the cellar are now in the museum EnergeticA in Amsterdam. www.energetica.nl

These links are meant to be able to find the museums, should you want to visit them. On the websites of these museums there are no pictures of the ex-Evoluon machines.